Larry and Kathleen had a cottage in Irons Michigan that had a bowing wall in the basement. The bowing had started about 20 years ago but they covered it up with insulation. They recently removed the insulation due to some water intrusion in the basement, where they found that the water was coming in from the bowing wall. The couple wanted to refinish their basement since the home was built in 1986 but needed a fix for the foundation and water issues first.

Jamey went to inspect the vacation home and see what solutions they could use to keep the home from moving and water out of the space. He talked with the couple, giving a few options and helped explain each one so they could make an informed decision.

Sheldon and his team installed GeoLock Wall Anchors to stabilize the walls and keep the water from entering the basement. They explained the process of installation and all the steps as they worked so Larry and Kathleen could get a true understanding of what was going on in their home.

The GeoLock Wall Anchor system prevents inward movement of the wall. They work by extending beyond the home into stable soil where they use the stronger soils to brace the foundation. A rod connects the earth anchor to wall plate inside the foundation that is tightened into place. The system is installed with minimal distribution to the lawn and basement! After the installation is finished, we restore the landscaping and basement to the state we found it.

Katheen and Larry were happy with the interactions they had with our team as well as the solution we installed for them! We were able to close some of the cracks, achieving some wall movement at the time of install! 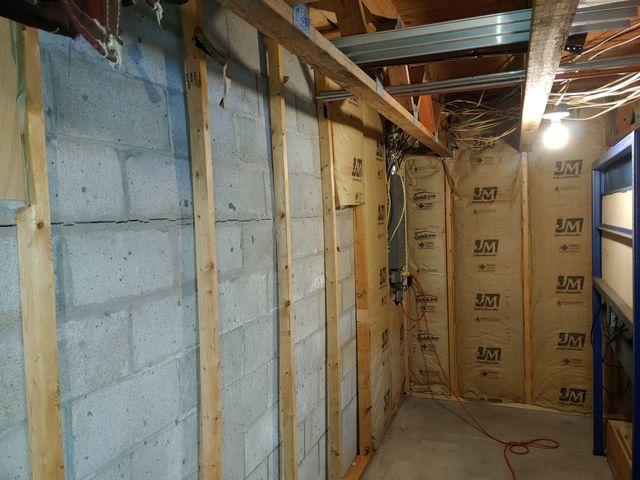 The foundation wall of the couples cottage before the install. The wall has a long horizontal crack that started to bow causing a space to form where water could come in.

This is the earth anchor that is attached to the steel rod in hard, packed soil beyond the home.

These are the wall plates inside the foundation and they do not take up usable basement space.

This is the lawn after the installation. We fill the holes we make back in and try to keep it as we found it!