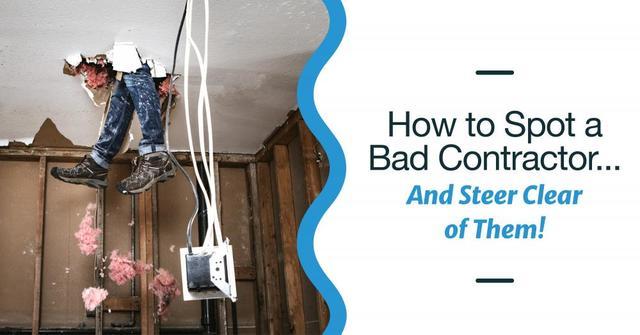 Agreeing to let a someone repair or improve your home takes a big leap of faith. After all, this is your home we’re talking about. More than just a roof over your head, it’s where you and your family spend a large part of your lives together, from first steps to first proms. Plus, your home is likely your largest financial investment.

So, when you hire a contractor, you have to trust that he or she will not only do the job as agreed but also respect your home and its contents. And, when you hire a bad contractor, it can be a real nightmare of broken promises, half-completed jobs and eventual legal action.

With that in mind, let’s consider some warning signs that let you know this contractor might best be avoided.

Above all, trust your instincts. You’ve gotten far enough along in life that you’re likely a pretty good judge of character by now. You’re attuned to the various tics and tells that alert you that someone may be less than trustworthy. They won’t look you in the eye. They exaggerate a lot. They won’t give firm dates or times. So, don’t let the tantalizing prospect of a quick fix or lowball estimate entice you into an agreement you may regret later.