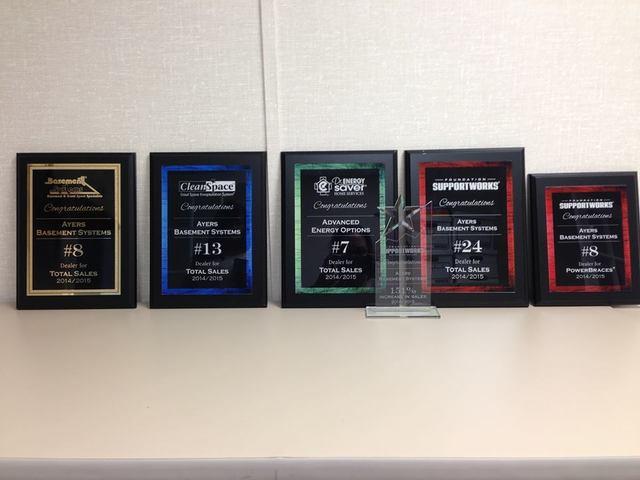 What do you get when you put 52 members of the Ayers Basement Systems team on two buses at 5am on a Wednesday and send them to Connecticut?

We decided to find out last week, when members from every department of the team traveled to the annual Basement Systems convention. This year's theme was "Build" and the three day event took place at Basement Systems headquarters in Seymour, CT and the Connecticut Convention Center in Hartford, CT. 1450 attendees from the dealer network made the trip, the highest attendance the convention has had to date.

It was a long journey; lots of stops, lots of traffic, and lots of shenanigans made sure that when we arrived at 10pm Wednesday night we were all eager to be off of the bus and more than a little slap happy to boot. Luckily, the Arch Street Tavern was gracious enough to keep their kitchen open late to feed us.

We were up bright and early Thursday morning for the convention kickoff and keynote speech from author, business strategist, and motivational speaker Erik Wahl. Wahl combined performance art (in the form of live action graffiti) with music videos and his outside of the box approach to business innovation to encourage us to approach the convention - and our work - with optimism and creativity in order to achieve results. There were more than a few watery eyes in the house and everyone left the room energized for the long days ahead. 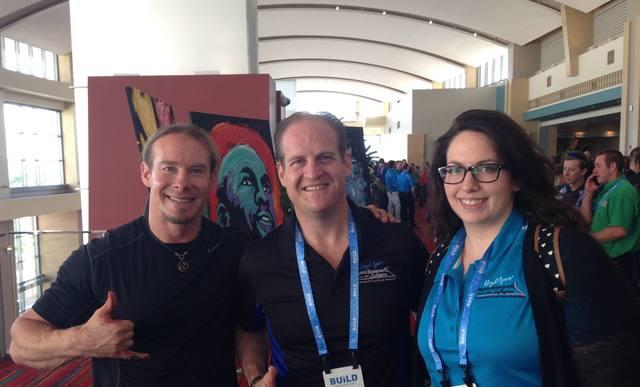 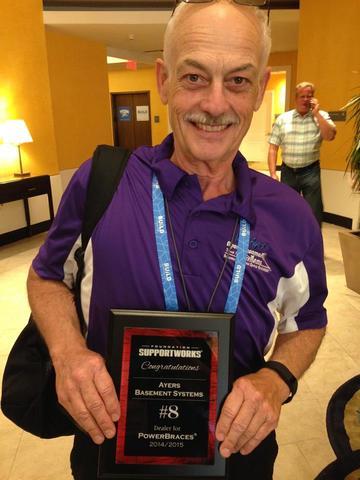 Virgil shows off our first award of the weekend.

Thursday night was the biggest award presentation of the convention, with Basement Systems and Foundation SupportWorks naming their top dealers for 2014-2015. 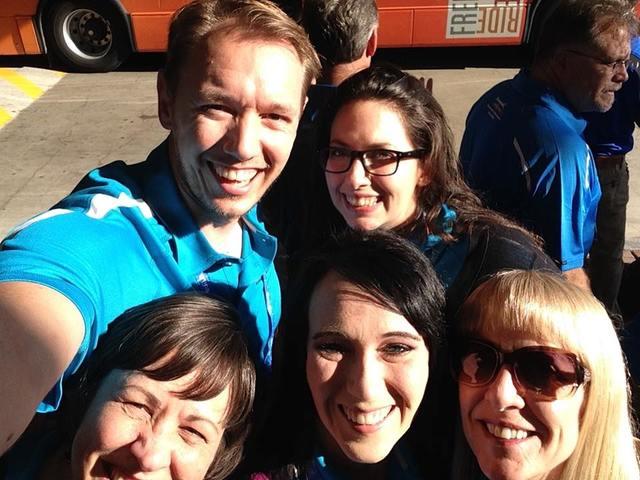 (Most of) the Ayers Marketing Team passes the time waiting for the shuttle to the awards ceremony.

Our team was out in full force, with matching polos and high enthusiasm. This was a common theme of the weekend, with other dealers saying something along the lines of "You guys sure are loud" upon finding out which company we were from. They say loud, we say proud. Well, and loud.

After two years hovering at #11, we made a huge jump this year and were named the #8 dealer in the Basement Systems network! Keep in mind, this is #8 out of well over 300 dealers; it's a big deal. We reacted accordingly (read: loudly) to the news. Luckily, the moment was caught on film by our Basement Systems account manager Michele. 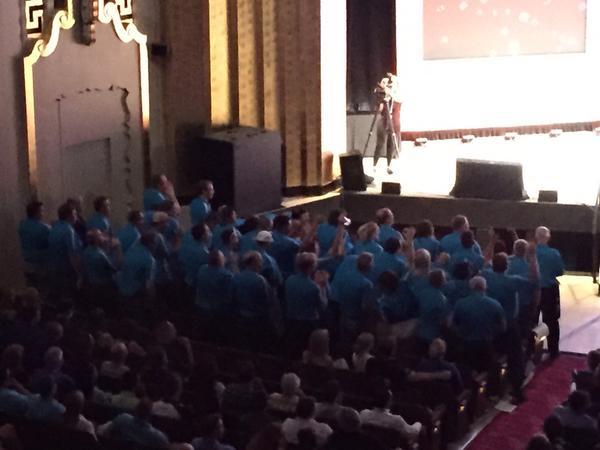 The Ayers team cheers after being named the #8 dealer in the Basement Systems network. Photo credit: Michele Smoly

This wasn't the only award we took home, though. We were also named:

Riding high on Thursday's wins, we were ready for a long, educational day at Basement Systems headquarters when Friday morning came. There were sessions throughout the day, and multiple classes during each session, so no matter what our role in the company is, we all had something informative to go to. Classes covered topics like social media, customer service, product installation, and everything in between, and everyone left brimming with ideas for how to implement what they'd learned

Friday night brought a group dinner at the Convention Center and more awards. Ayers was honored for being the dealer with the most growth in the Foundation Supportworks network, as we had a 151% increase in sales in 2014-2015. 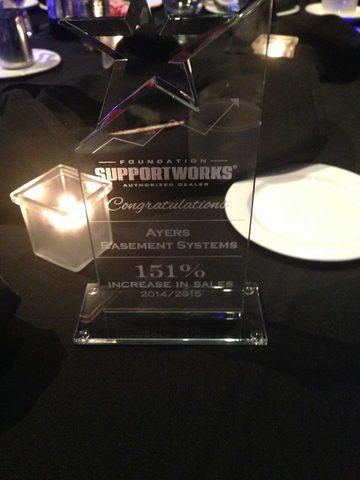 Our snazzy award from Foundation Supportworks for a 151% increase in sales.

Finally, Basement Systems named their top salesmen for 2014-2015, and our very own Roger Powell was named #13 in the entire network. Our team showed their enthusiasm (and volume) again as he walked the stage, and Sales Manger and Trainer Mike Remar was so enthusiastic he almost passed out from straining to yell just a little bit louder. Job hazard. Congratulations, Roger! 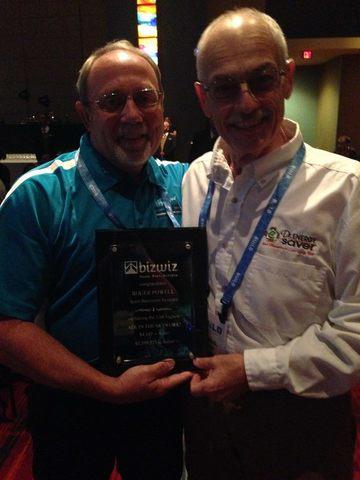 Saturday was our final day at the convention, and it was just as intense as the first two. Classes were divided into tracks - marketing, production, sales, etc - and featured in-depth discussions and presentations on innovating and working to make our departments as productive and successful as possible. They also offered an opportunity to network with our counterparts from other dealers, to share ideas and feedback.

After wrapping up Saturday's classes, all the was left was the legendary Saturday night party, which was themed "Beach and Boardwalk" this year and featured a live band as well as carnival food and games and as many light up accessories as you can imagine. The airbrush tattoo stand went over especially well with the Ayers team, many of whom chose to ignore the offered stencils and do it their own way. 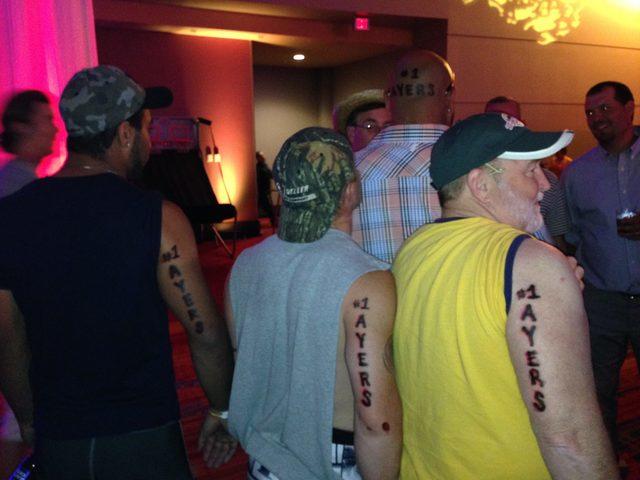 David, Nick, Marty, and Scott show off their custom tattoos.

Everyone had a great time dancing and eating too much fried dough, and our System Design Specialist John Sanger even got up and sang a few songs with the band to the delight of the crowd. Thanks again, Basement Systems!

But all good things must come to an end, and they come to an end quite early in the morning when you have a 13 hour bus ride ahead of you. So, after we'd danced ourselves silly, we boarded the bus back to Michigan. 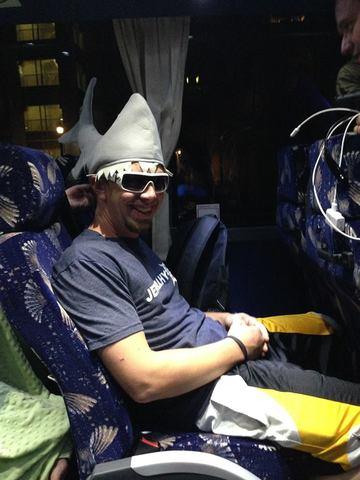 Corey's shark hat was a big, if mysteriously acquired, hit.

The mood on the bus was decidedly more mellow on the return trip, partly because it was the middle of the night and partly because we'd had a long few days of learning and planning ways to grow when we got back to the office.

Where everyone was excited and restless to get started on the trip there, on the way home we simply chatted. We chatted about how tired we were, how tired of the bus we were, how many miles there were until we were off the bus...you get the picture. But we also happily chatted about what we'd learned, who we'd learned more about from the team, and what we wanted to put into practice when we returned to the office.

And some of us were very over the idea of chatting. 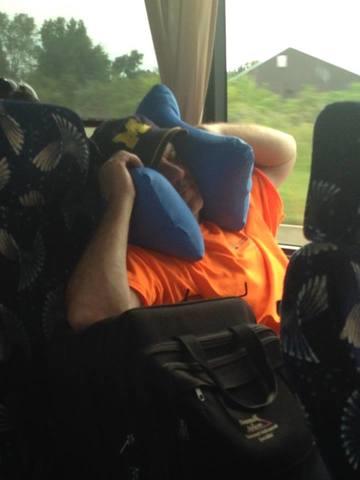 What do you get when you put 52 members of the Ayers Basement Systems team on two buses at 5am on a Wednesday and send them to Connecticut?