When our System Design Specialist Greg talked to Carolyn, she was at the end of her wits with her basement. She had purchased her home last year, and though the previous owner had had a basement waterproofing system installed (by a different company), the constant flooding in her basement proved that it just wasn’t working. The standing water was causing mold problems and making her huge basement unusable. She wanted it fixed, and she wanted it done correctly, so she asked us to take a look.

She wasn’t exaggerating about the mess. The first 2 ½ feet of her walls were covered in mold and silt, and there was water pooling all over the floors. The sump pump was basically useless as no water was actually making it over to the pump, and everything had that distinct wet smell - the smell that lets you know mold and mildew are running rampant. The steps and other wooden structures were starting to warp from the standing water and subsequent high humidity, and the whole space was just...gross.

The first step was to design a waterproofing system that 1) actually worked, and 2) worked for this basement. Every basement is different - that’s why we always recommend an inspection before diagnosing a problem - and this one had multiple low spots that made diverting the water to the sump pump more of a challenge.

The solution to proper water diversion was to not only install a perimeter system of the WaterGuard, but also cutting paths across the floor. By installing cross sections of WaterGuard, we create a sort of expressway across the basement, which allows water to drain faster and be more effectively discharged by the sump pump.

We needed to go a little harder to take care of the area hit worst by standing water - the foot of the stairs from the outside entrance - so we installed a TrenchDrain system. TrenchDrain is a grated drain system that lays flush with the floor (no tripping hazards here) and is designed to span doorways and entrances that have water issues. The grated opening allows water to drain quickly and the system is tied into the WaterGuard installation, so everything gets shuttled to the sump pump in short order.

Ah, the sump pump - another area in need of improvement. We replaced the old pump with a new Ultra Sump pump with a backup battery, so even in the event of power loss (like...during a thunderstorm), the pump will still do its job. Between that and the new, actually useful WaterGuard system, the basement was looking better than ever. 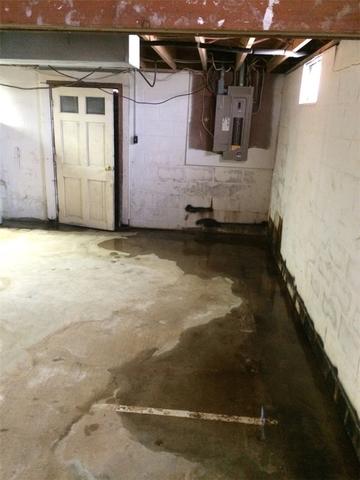 It's not very inspiring to see water pooling on top of a previously installed waterproofing system. This corner had some of the biggest problems with standing water, as water leaked in through the outdoor entrance. 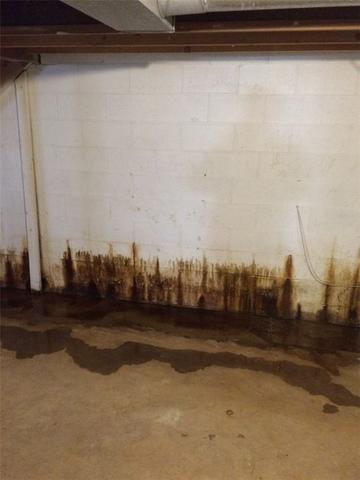 Can you imagine going in the basement and seeing...this? Most of the walls had growth like this, a mix of mold and silt and really who cares what it is, it's gross. 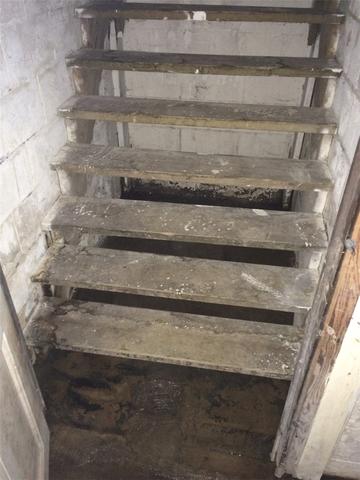 The stairs are showing major signs of water damage, warping and with visible mold. They'll eventually crack if the water issues aren't taken care of. 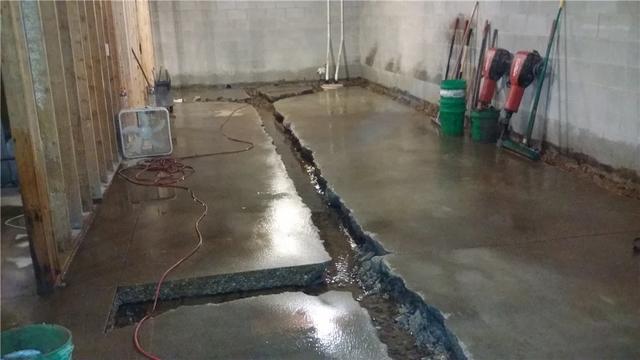 We drilled the floor out in cross sections in order to install a sort of WaterGuard super highway. This way water can't log jam on its way to the sump pump. 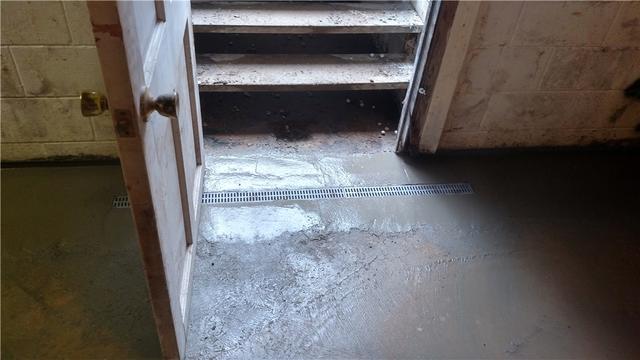 We installed a TrenchDrain system at the bottom of the outside stairs to provide a quick-drain solution for water entering there. It's tied into the WaterGuard, so all collected water goes right to the sump pump. 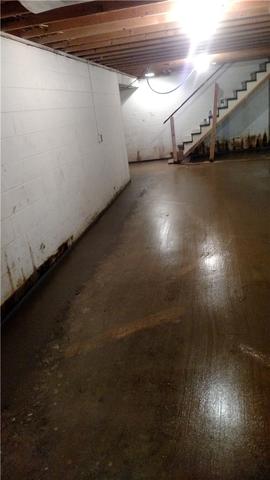 This was a huge basement and it was a shame that it just couldn't be used in its previous state. But with a new, reliable, properly installed waterproofing system, it's in great shape for the future.

Photo Gallery: Fixing Another Company's Mess in Portland, MI
Back to Previous Page
Back to Case Studies