Tami called in the hopes of restoring her once finished basement to clean, dry, usable space. Water had regularly come in through the walkout portion of the basement and despite working to make adjustments, she couldn’t figure out a way to prevent the water intrusion. She had plans for two bedrooms in the basement and needed to ensure that her remodeling wouldn’t be a waste of money ruined yet again by flooding.

So she called us.

Our system design specialist Jamey inspected the basement and came up with a multi-step plan to get Tami on the road to renovation.

First came the waterproofing. A full perimeter of WaterGuard below-floor french drain along with multiple feed line tie-ins to ensure the water will flow was the base of the system. Everything was set to flow to a new TripleSafe sump pump, which would have no problem keeping up with any amount of water given its three powerful motors and high pumping capacity. He also suggested covering the walls with our CleanSpace wall system, which is a vapor barrier that will prevent water from leaking through the walls and allow for wall finishing that’s protected from moisture. A SaniDry dehumidifier was the final touch to take care of any ambient moisture.

Next came safety and function. We installed an egress window in each of the two bedrooms (and actually moved the planned location because once everything was in progress, Tami was able to really think about the use of the finished space and realized the layout would be more functional with a few changes) that not only provided much more light, but allowed the bedrooms to meet building code. Not only does adding two legal bedrooms increase the use of the home, but if she sells, it greatly increases the property value.

Finally, we added some finishing touches. As the project progressed, Tami realized that we could provide many of the finishes she had in mind with all of the added reassurance of them being waterproof. So instead of waiting and hiring another contractor and starting the process over again, she went with the people she knew she could trust and asked us to install Basement to Beautiful panels on the walls (which look nice on their own but can also be covered with traditional paneling) and espresso plank flooring. We were able to integrate both with the waterproofing system to ensure that nothing ever needs to be cut into for maintenance and everything works together to provide a clean, dry, usable finished space in the basement.

It’s heartbreaking to spend money finishing your basement only to have to do it all over again because of water damage. Using a waterproofing contractor like Ayers and products made specifically for basements allowed Tami to reclaim the finished space in her basement without that worry. 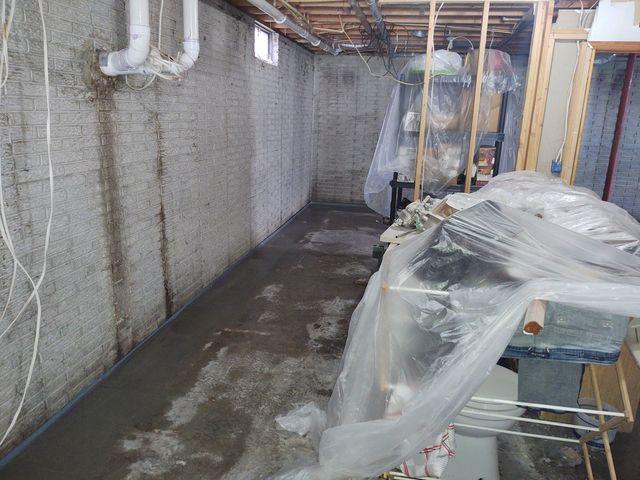 Staining on the walls and floor shows where water has come into the basement in the past. 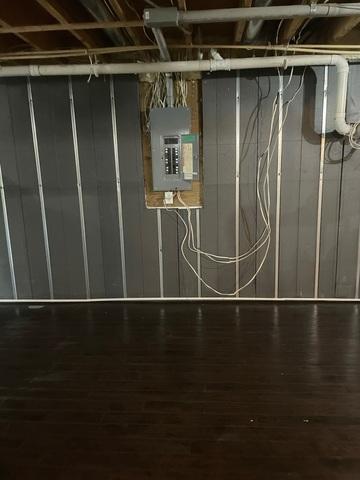 Basement to Beautiful wall panels provide great insulation and water protection, and can be covered with your choice of wall paneling. 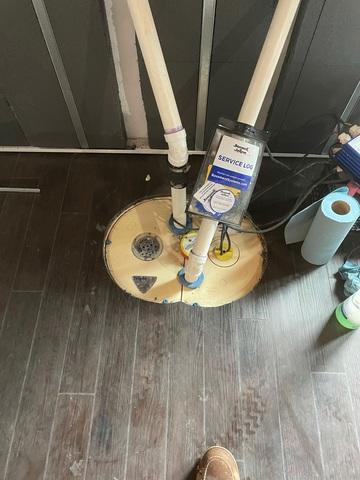 By installing the flooring in conjunction with the waterproofing system, we're able to effortlessly integrate all parts of the system for easy access to components like the TripleSafe sump pump. 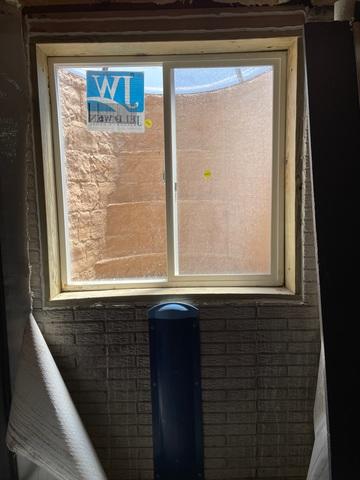