When you have a problem in your home, it can be confusing, stressful, and frightening. And when the company that promises they can solve your problems actually makes them worse, that stress multiplies. This was the case with Karen, who had another waterproofing company install a system in her house.

The company did shoddy work, and when the system failed, they tore some of it up, told her there was nothing they could do, and left her to deal with not only the original problem, but the new problems they had created.

The installed pump system was regularly filling with sand, and the pressure of the incoming water was so great that it looked like there were springs coming up in the basement - at one point we braced the pumps with a beam to keep them in the ground and they were still trying to come up.

Worst of all, during our inspection and process for getting the basement ready for waterproofing, the project foreman discovered that the foundation was settling dangerously, putting the entire house at risk. This increased the scope of the project and required the addition of one of our foundation repair crews. But we were determined to give Karen a permanent solution that would make her home safe and comfortable.

This wasn’t the first time we’ve been called to fix the work of another company; it wasn’t even the first time this month. This was one of the worst systems we’ve pulled out, though; at a few places in the basement, the other company had removed three foot wide sections of the concrete floor for no visible reason.

Once the extent of the problem was discovered, we scheduled our waterproofing and foundation crews to work in tandem and get the job done as efficiently as possible. The first step was to triage the rushing water, which I mentioned above - we literally had to brace the pumps with 2x4s to keep them in the ground while we removed the perimeter of concrete.

We installed a full perimeter of WaterGuard, our below-floor drainage system. The WaterGuard sits below the floor but on top of the footer, which allows it to collect incoming water without getting clogged. We also put feed line in across the basement to connect low points of the drainage system. Feed line helps route water to the sump pumps faster by creating shortcuts to the sump pumps.

Speaking of sump pumps, we added Karen’s existing pumps to two of our SuperSump pumps. We also added IceGuard to the discharge lines. IceGuard’s one way valve that attaches to the line and prevents water backup in the event of a frozen line in the winter by spraying water out through a grate instead of allowing it back in.

While Gage and his crew were taking care of the waterproofing inside, Evan and his crew worked to stabilize the foundation. We installed 22 helical piers around the perimeter of the home; the piers are secured in deep, stable soil and attached to the house. By shifting the weight of the house from the surrounding soil to the piers, we can prevent further settling and even lift the house to counteract it. Evan’s crew also installed four GeoLock wall anchors to stabilize and straighten a wall that had begun pulling away due to the foundation settlement.

This was another long project that required coordinating multiple crews and many moving pieces, but at the end of the day, Karen was thrilled with the results. Both the known problems with water and the newly discovered structure dangers were solved and her home is now comfortable and safe. 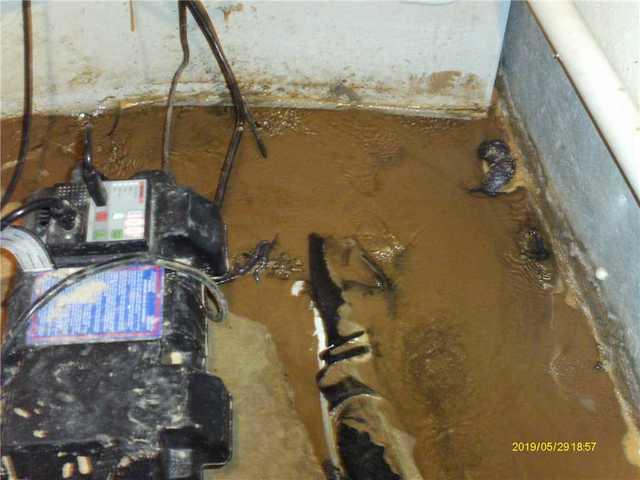 This is what the other company left behind. A torn up, flooded, sandy mess. 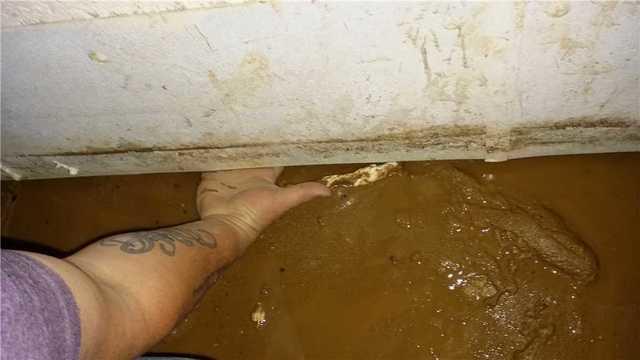 Our foreman Gage told Karen, "I'm only going to do this once," and quickly showed her that he could put his whole hand between the wall and the floor - the foundation had started sinking, leaving the wall unsupported as well as the whole house. 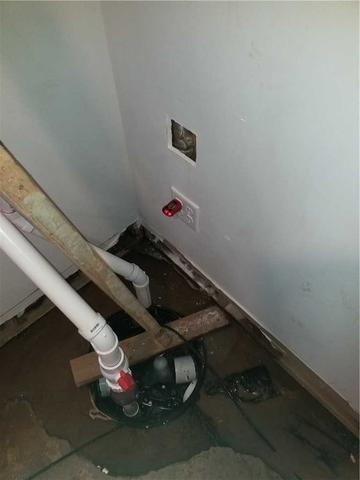 The power of the incoming water was so great that we had to brace the sump pumps with 2x4s to keep them in the ground - it was like a spring had formed. 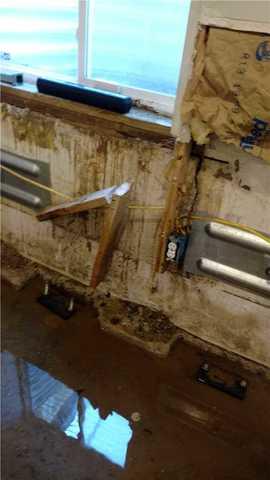 This wall is secured with GeoLock wall anchors, which will prevent it from bowing further and, over time, hopefully straighten it. Below the anchors are helical piers, which stabilize the foundation. 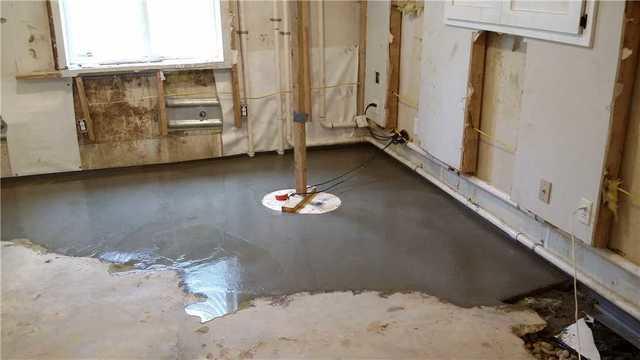 After the waterproofing system is installed, we pour new concrete to restore the floor. From the amount of concrete poured here, you can see how much the first company to do the work tore up unnecessarily.